You are here:
Player Profiles

Bio: After famously getting 3 hammy rub-downs while SNESA Waterboy, Harro continues to surprise in 2012. Bagging over 300 goals for SNESA in 3 seasons, Ben hit the ground running when he arrived at the club in 2009. Despite interrupted seasons due to urgent hair styling or body waxing appointments, Ben would often pop up and bag 10+ goals in a game, ending up with absurd end of season tallies and the leading goalkicker trophy.

Occasionally Ben receives unwanted attention from opposition defenders. Even the slightest tap to his fragile candy-glass jaw will render Ben unconscious, remembering nothing except for his multibet that he placed the day before. This can be the least of his concerns though, as Harro’s ever-smooth legs have been known to sometimes cause him an ingrown hair. This form of discomfort is barely imaginable to the common man.

Not only this, but Ben has to deal with the pressures of being a topless model. Harro spent an entire week with a small spanish man who would oil his abdominals and spend the weekend taking topless photos of each other, much like the one below. 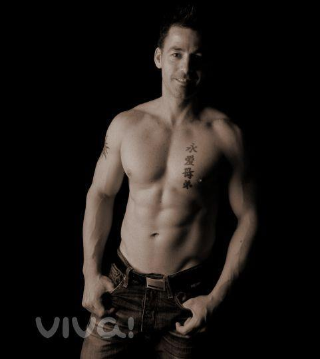 A dead-eyed-dick in front of goal, this two-eyed-dick changes his boots at every quarter break. If he comes off the ground, he also changes his boots, so his fiancee Jess is required to bring over 14 pairs of boots on gameday because Ben can’t fit them in his car because of all the giant bags of protein. Ben is well known for his ferocious forward line tackling pressure, and significant number of handball-based goal assists each week…
LOL

If not for Jess, Harro would be an absolute no-hoper. Luckily for SNESA, this forward line superstar has his head in the game, and continues to deliver. A household name during the glory-days of the Sunday League, the Saints are fortunate to still be hearing “Yessssss Ben” each weekend, as Harro begins another ridiculous goal celebration. With his grips firmly on that goalkicker mantle again in 2012, Benny Harris will be looking to help the League side push deep into the finals.